REVELATION: THE PERIODS OF SEALS, TRUMPETS AND VIALS ARE NOT CONTEMPORARY IN ALL THEIR EXTENSIONS.

I have heard some brethren say that the seals, trumpets and vials of Revelation are three different symbols which represent the same periods of the last days.  It is to say, that according to their interpretation, the fourth seal, for example, represents the same period represented by the fourth trumpet and the fourth vial, but depicting other details in each one.
I am do not agree with this interpretation. The first six seals are opened and no trumpet has been heard yet, nor any vial has been poured out either.  The seventh seal is what triggers the beginning of the sounding of the trumpets.  By the same token, the first six trumpets have been heard, but still no vial has been poured out yet.  It is after the sounding of the seventh trumpet that the pouring out of the seven vials begins.  In general, we see that the seventh period of each symbol includes the seven periods of the next symbol.
I am going to show a numeric example and a graphic example, to try to explain how I think the periods represented by these symbols are going to appear.  After I have explained what I think, I will show the biblical basis that backs my interpretation.
During the period of the seventh seal the seven trumpets are heard; and during the period of the seventh trumpet, the seven vials are poured out.  It is as if the seven trumpets are a detailed account of the events that will occur during the seventh seal period; and the seven vials are a detailed account of the events to occur during the seventh trumpet period.
These periods are different in duration, but in order to make my explanation easier let's suppose that the seven periods corresponding to the same type of symbol are of the same duration.  Let's suppose that each one of the seven seals, just for the sake of using an easy number to handle, are going to last 49 days, not because I think that this is going to be the real time they will last.  Let's also suppose that each trumpet will last 7 days, and that each vial will last one day.  All together, the seals, trumpets, and vials, are going to last 343 days.  Remember that this is just an example for didactic motives.  If we admit these durations then:

After the seventh seal is opened, during the period it represents, the period of the sounding of the seven trumpets will begin.  Therefore, continuing with this hypothetical example of the numbers, the trumpets periods would last in the following way:

I started, on purpose, the period of the first trumpet on day 297 instead of 295 because I wanted to emphasize that the first trumpet does not have to be heard immediately after the opening of the seventh seal, but at anytime after its opening.
Continuing with this numerical example we will see that the first vial would be poured out at any moment of the 337 day, after the sounding of the seventh trumpet.  I think that all this will happen in rapid succession, but let's keep using our numerical example.  So, the vials would be poured out on the following days:

I want to remind again, that I am not saying that these periods are going to last what the example says. I repeat this because I am afraid that someone could start saying that I said that the seals are going to last 49 days, etc.. As an example we can say that the third trumpet could last more (or less) than the fifth seal.  What can be said for sure is that the seventh period of a type of symbol includes the seven periods of the next type.  If  I had to express this idea graphically, I would do it with the following graph. 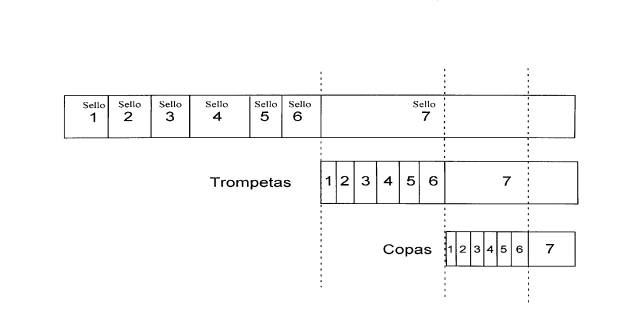 As we can see in the numeric example, "day 343"  belongs to the seventh seal, ( days 295 to 343 ), to the seventh trumpet, ( days 337 to 343 ), and to the seventh vial ( day 343 ).  By the same token, in the graphic example, the last portion of the seventh seal, the last portion of the seventh trumpet and all of the seventh vial, are concomitant. This explains why the seventh seal, the seventh trumpet and the seventh vial finish in the epoch of the Second Coming of the Lord and the destruction of the antiChrist, and all three contain elements of the end of times.
Of course, all this is just a theory with the same authority or lack of authority than the one elaborated by anyone else. Anyways, the most brainy elaborated theories could be rendered obsolete by a new and more logical theory or by the implacable reality.
Observing the first four seals we are led to think in the possibility that some of these periods do not have to end when the next starts.  Rather, their starting points are successive, but because of their total duration, they are partially contemporaneous.  For example, the second seal, seems to be the war, the third one the famine, and the fourth the death.  I don't think that first there will be a period of war, then after the period of war, a period of peace, and then the period of famine will begin, and when finished, a period of abundance, and then the period of death.  The starting points of these three periods are successive, in sequential dates, but the duration of them are such that they last till after the beginning of the next period, and even well into it, or more. Therefore, there will be, at the same time, war, famine and death.  Maybe the deaths will be caused by plagues that will be un unleashed in the future.  The consequences of the opening of these seals will last into the fourth seal.
If someone has a better interpretation and can substantiate it with proofs or reasoning, please let me know, because I love to learn from my mistakes.  Let me now explain what are the basis for my interpretation.
First argument.  According to Rev 8: 1-2  the seven angels receive their trumpets after Jesus Christ opens the seventh seal.  It is easy to realize that previous to the opening of the seventh seal nobody had a trumpet to sound.  Therefore, the periods represented by the trumpets cannot be contemporaneous with, nor equivalent to, the periods represented by the seals.

The second argument is that the seals are opened by the Lamb, and no one else was considered worthy to open them, as is stated in Rev 5: 2-5.  Therefore, it is not logical to think that if the trumpets and the vials supposedly are the samething than the seals, these two last ones were handled by just angels, and not by the Lamb Himself as was the case of the seals.

throne a book written within and on the backside, sealed

with seven seals. 2 And I saw a strong angel proclaiming

with a loud voice,Who is worthy to open the book, and to

loose the seals thereof? …… 5 And one of the elders saith

unto me, Weep not: behold, the Lion of the tribe of Juda,
the Root of David, hath prevailed to open the book, and

to loose the seven seals thereof. 6 And I beheld, and,…..

throne……9 And they sung a new song, saying, Thou art

worthy to take the book, and to open the seals thereof:

for thou wast slain, and hast redeemed us to God by thy

blood, out of every kindred, and tonge, and people and

For the third argument we must remember that "the harvest" represents the gathering of the Christians.  Then we must consider that in the last verses of chapter 14, Jesus reaps the harvest, and that following the reaping the angels work in the gathering of the grapes of the wrath of God, for which in 15: 1 seven angels have the seven vials with the seven last plagues.  So, it is evident that Jesus came in the seventh and last trumpet, and after that, the angels receive the vials.  Therefore, the seven vials will be poured out after the seventh trumpet.

"14 And I looked, and behold a white cloud, and upon the

cloud one sat like unto the Son of man, having on his head

a golden crown, and in his hand a sharp sickle. 15 And

another angel came out of the temple, crying with a loud

voice to him that sat on the cloud: Thrust in thy sickle, and

reap, for the time is come for thee to reap; for the harvest of

the Earth is ripe. 16 And he that sat on the cloud thrust in his

sickle on the Earth; and the earth was reaped. 17 And another

angel came out of the temple which is in heaven, he also

having a sharp sickle. 18 And another angel came out from the

altar, which had power over fire; and cried with a loud cry to

him that had the sharp sickle, saying: Thrust in thy sharp
sickle, and gather the clusters of the vine of the Earth; for

her grapes are fully ripe. 19 And the angel thrust in his sickle

it into the great winepress of the wrath of God. 20 And the

winepress was trodden without the city, and blood came out

of the winepress, even unto the horse bridles, by the space of

a thousand and six hundred furlongs.

15: 1 And I saw another sign in heaven, great and marvellous,

seven angels having the seven last plagues; for in them is

These three arguments show that evidently the seals, trumpets, and vials are all symbols that represent completely different periods.  It is also noticeable that even the beginning of the first period of each symbol are not contemporaneous, the last period of all of them are concomitant.  It is to say that the seventh seal, the seventh trumpet and the seventh vial are partially contemporaneous.