Pacts and Marriages with Non-believers

To accept the unjust demands of an enemy instead of leaning on God to fight him, is a big mistake. To unite in a covenant with one who hates God, leads to physical and spiritual slavery.

"13 Now in the fourteenth year of king Hezekiah did Sennacherib king of Assyria come up against all the fenced cities of , and took them. 14 And Hezekiah king of sent to the king of Assyria to , saying, I have offended; return from me; that which thou puttest on me will I bear. And the king of Assyria appointed unto Hezekiah king of three hundred talents of silver and thirty talents of gold. 15 And Hezekiah gave him all the silver that was found in the house of the LORD, and in the treasures of the king's house. 16 At that time did Hezekiah cut off the gold from the doors of the temple of the LORD, and from the pillars which Hezekiah king of had overlaid, and gave it to the king of . 17 And the king of Assyria sent Tartan and Rabsaris and Rabshakeh from to king Hezekiah with a great host against . And they went up and came to . And when they were come up, they came and stood by the conduit of the upper pool, which is in the highway of the fuller's field."      ( II K 18: 13-17 )

In this passage we see King Hezekiah humiliating himself and his whole nation (14) before an alien king ( or interest ), making a pact with him, and plundering God's to appease his enemy ( 15-16 ). But it was useless, because Sennacherib, after receiving all that Hezekiah gave him, ordered his troops to attack anyways.

Everything that Hezekiah gave Sennacherib weakened the former and strengthen the latter. Now Sennacherib had more resources to fight against Hezekiah, and Hezekiah had less resources to defend himself from his attacker. Nevertheless, the Assyrian got all this by just talking and promising.

At last, Hezekiah had to do what he should have done since the beginning: trust God and fight, because this is the only language that God's enemies understand. If he would had started this way, he would now have three hundred talents of silver and thirty talents of gold more than before.

God keeps us safeguarded, as if surrounded by a thick and high wall. The enemy, (either physical or spiritual ), cannot penetrate the wall to attack us. They know it, and that is why they try to convince us to come out of the walls. This is done by enticing us to sin, or by making pacts with ungodly people.

When we keep ourselves with God, we are surrounded by His protection, as is the case of a city with a thick and high wall around it. This would be the case of city "A", whose diagram is shown below. But when city "A" joins the nearby city "B", then the weaknesses, gaps and breaches of city "B's" wall, become the weaknesses of former strong city "A". Now the enemy, who could never breach city "A's" wall, invades easily through city "B".

This is true in the physical world as well as in the spiritual realm. Heavy or deep unions with ungodly people, weaken God's servants' defenses. This is exactly what happens when God's people marry ungodly ones. 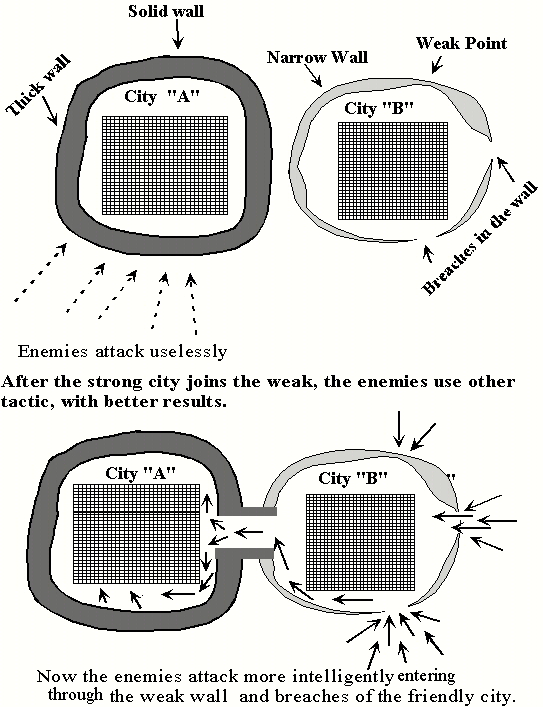 Back to the Index