Longevity and the Flood

It is logical for a believer to think that when the planet was created, and when its soil came out of God's Word, it was as fertile as it could be. During the Flood the waters covered every mountain and softened the soil, which of course, started to slide down to lower parts of the land. Thousands of landslides must have occurred, peeling off mountains and hills of its fertile original soil. When the waters started to decrease going to the seas, those streams of water dragged the good fertile original soil that existed in mountains, hills and valleys, depositing it at the bottom of the oceans.

After the Flood, rain has been doing the same job, washing away terrains all around the world, and dragging its soil to the sea. Thank to the constant growing of all kind of plants, (even in deserts or on rocks), and by the constant fall of cosmic dust, the surface of the Earth is not depleted of its soil and organic layer.

Perhaps it was on account of this soil washing, and the disappearance of some plants, that the human race started to decrease in longevity. The fact of the matter is that after the Flood longevity shrank a great deal, as we can see in the first graph. Our biblical forefather's life span were in the rank of nine centuries till Noah. His son Shem decreased his life span to about 60 % of that of his father. We must remember that Noah lived 600 years eating the food grown in the soil God first created, and his son Shem only ate of that kind of food for 100 years. Before the Flood, for more than 1600 years after the Creation, mankind enjoyed all original foods that were created, and enjoyed a great life span; those who were born less than a century after the Flood had lived less than 25 % of what their ancestors lived.

The third graph shows us in chronological sequence the life span of the first 22 patriarchs. In this third graph we realize how their life span decreased as time passed. According to Moses, in his time the common life span was 70 or 80 years, as he says in Psalm 90: 10.

"The days of our years are threescore years and ten; and if by

reason of strength they be fourscore years, yet is their strength

labour and sorrow; for it is soon cut off, and we fly away." 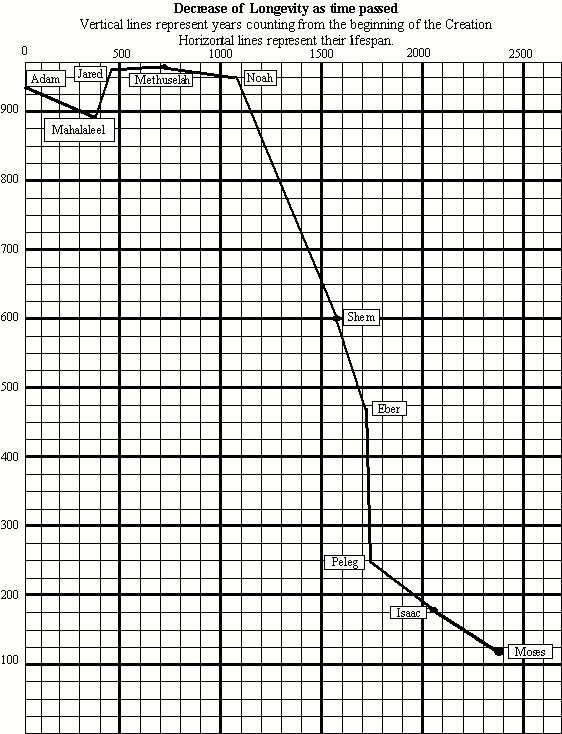 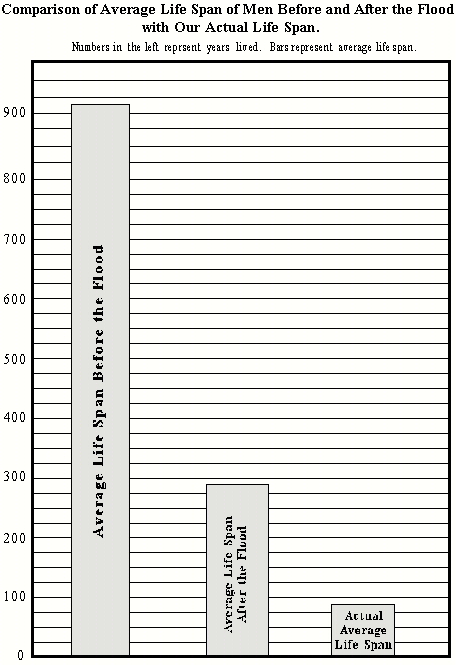